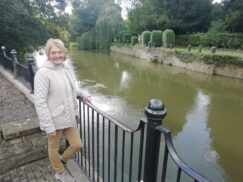 From the horses mouth. We recently conducted a follow-up survey among clients of the MS Therapy Centre in Warminster who’ve been using Immustem colostrum. The results make for some compelling reading. We’re delighted and we hope it might encourage others to think again on how organic colostrum might be able to help.

I first started taking Immustem in July 2019 after a presentation by Liz and Freddie on IgBioscience and Immustem. I used to be very active, I was a tree surgeon and then a tree surveyor for utility companies. My MS now means I can’t work and I can’t even lift a saw.

The changes I’ve noticed since I started taking Immustem colostrum are that I’m much less irritable, more positive, and this is, I reckon, because I now have much more energy. I can just just cope with everything much better, to the extent that I now feel I’m starting to live again rather than just existing. Before, all my energy went on just getting through the day. My life parameters have changed and I’m more optimistic about everything.

A couple of weeks after I started taking colostrum, I was on holiday in Cornwall. There’s a rocky and uneven path that normally I wouldn’t even consider walking on. It was about 3/4 mile long. I never did anything difficult and always believed I couldn’t. But here’s the thing…this time I just felt I could and I would. I wanted to have a go. This is what I mean about the optimism…I felt that I can not that I can’t, as I did in the past. I took my walker with me half way down the path, and then dumped it. I managed without it and without too much difficulty. I have never done this before.

And that’s not all. I suffer from very high cholesterol levels, twice what they should be. They have now normalised. This is in the last two months. In that time there’s been no change to my routine, apart from the introduction of Immustem colostrum.

I have my cholesterol levels checked regularly as it’s a family condition for which our doctors have said there’s no cure. The cholesterol levels have never been normal, until now. Personally I put the changes down to the colostrum.

I’d been taking the colostrum for 2 months, and by that time I realised I had more energy and slight improvements to my mobility. I can walk further now. And there’s definitely been an improvement in my gut. This has always been an issue along with my MS. I feel more positive now, more optimistic and a better sense of well-being.

3 Jane from Hampshire has slow progressive MS and has been taking colostrum products since July 2017.

I have MS and started taking Immustem colostrum in April 2018. I noticed I had more energy and was walking longer distances. For some reason after six months I stopped taking it, the worst decision I could have made. I went downhill and my walking got worse and in February was hospitalised with Sepsis which I know wasn’t anything to do with my MS – but I was very ill. My body just seemed to fall apart. I started taking colostrum again and my MS improved from not being able to even shower myself to being more independent. And moving without help. Then I started taking IgTumeric+ as well and I have improved so much that my husband said ‘it was so good to have his old wife back again.”

4 Libby from Fareham. She started taking in June 2017.

I do feel more positive and optimistic. I also have more energy. I have mobility issues and walk with two crutches. Before taking colostrum, I could get into the shower but it was awkward; I had to lift one foot into the shower with my hand as my foot couldn’t move by itself. Now I can step into the shower.  I don’t seem to get any coughs, colds or minor illnesses anymore and I feel that is because of the colostrum. I am not nearly as “run -down” as I was. I do have more energy and a feeling of well-being despite dealing with my MS. I’m not cured but I won’t stop taking colostrum, as I’m getting older, rate of disintegration is slow and I don’t know how bad it could have got with the colostrum.

5 Christine has secondary progressive MS and started taking Immustem 3 months ago at the beginning of July 2019.

In a very short time I had a much greater sense of well-being and positivity and am starting to feel like a normal person again. I always had energy but definitely have increased energy levels. Recently I decided to go shopping by myself to one of my favourite shops. In the past I used to visit it a lot but then it just became too much effort and I stopped going. After taking colostrum for just a few months, I went by myself, without a stick and did not trip. I used to feel my feet dragging but now I can walk without falling or tripping. It’s broadened my outlook as more things seem possible.

7. Penny from the Isle of Wight started taking Immustem colostrum in June 2017 .

I have greater sense of optimism about my life. I’ve got much more energy and a greater sense of well-being. I won’t stop taking it, because I’ve no idea if I would have declined further. I feel a sense of balance, and I don’t seem to get minor illnesses anymore. I just feel a bit safer and not so threatened by he MS and the changes it might put on me.

I seem to be doing rather well. People are commenting that I look very well. Massively increased energy and sense of well-being. I’ve started to find it much easier to do small amounts of work. I have had no coughs or minor ailments. I fully intend to keep taking it despite finding it another expense I cannot really afford.

After eight weeks of taking colostrum I’ve finally managed to normalise my bowels which were a source of constant grief for a year. I’m just happy with better bowels and a brighter outlook on life! But I hope young people will take this before the MS has caused to much damage. If it has increased my sense of well-being so quickly, imagine what maybe it can do for people in the early stages of the disease.