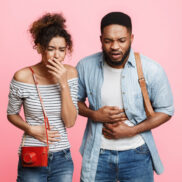 (IgBioscience note: This article is from Medical Life Sciences News periodical. The important bit is at the end – the active ingredient of this product is Bovine Colostrum – you could just take our Immustem – 100% pure organic bovine colostrum.)

It is not only overseas holidays that can be ruined by the dreaded Traveller’s Diarrhoea.

While most commonly associated with street food and travel to countries with poor hygiene, Traveller’s Diarrhoea is also a common complaint for people who travel interstate where the climate and food may be unfamiliar.

Mr Thomas Liquard, Chief Executive of biopharmaceutical company Immuron (ASX: IMC), said while many holidaymakers took out travel insurance, most are not aware that they can cheaply insure against the possibility of having their holiday ruined by Traveller’s Diarrhoea.

“People mistakenly believe that you can only treat Traveller’s Diarrhoea after you are suffering with it and put up with several days of discomfort and a lack of mobility,” said Mr Liquard.

“They are often very surprised to find that Travelan, which is an Australian-developed and clinically-proven preventative over-the-counter pharmacy product, can stop up to 90 per cent of cases of Traveller’s Diarrhoea before they even begin,” he said.

Mr Liquard said with thousands of dollars spent even on domestic holidays, it made sense to ensure you get the holiday you paid for.

“The last thing you want to do is to spend days or even a week of that holiday feeling ill and unable to see the things that attracted you to the holiday in the first place,” said Mr Liquard.

Around 70 per cent of those who travel overseas suffer from Traveller’s Diarrhoea and a significant number when travelling locally.

Most cases are caused by ingesting contaminated food and water and they often afflict those who have no natural immunity against localised issues with water and food.

Mr Liquard said Travelan’s clinically-tested formulation, which is taken before meals, was effective against up to 90 per cent of the causes of Traveller’s Diarrhoea.

“The antibodies in Travelan bind to these enterotoxigenic E.Coli and prevent them from attaching to the intestinal wall, thereby neutralising their ability to cause Traveller’s Diarrhoea,” said Mr Liquard.

“Travelan has also been shown to bind to other bacteria within the same family as e-coli, including shigella and salmonella. It therefore provides broad protection against bacteria that can ruin your holidays.”

The clinical trials also showed a significant reduction in abdominal cramps and stomach pain compared to those who did not use Travelan.

The clinical trials in Europe and the US were randomised, double-blinded and placebo controlled to ensure Travelan’s effectiveness.

Travelan’s active ingredient is Bovine Colostrum Powder, a rich source of antibodies that bind to enterotoxigenic E.Coli in the gastrointestinal tract, preventing them from attaching to the intestinal wall and thereby neutralising their ability to cause Travellers’ Diarrhoea and its associated symptoms.